The main part of the day was the BBC tour. We started of in the BBC breakfeast. It was a surprise to realise the 'window' isn't actually a window, instead a pre-recorded view of MediaCity. There was an interactive room where you can be on fake BBC breakfeast or question of sport. Mummy was on BBC breakfeast, and daddy was on question of sport. Mummy had to read from a screen on a camera that showed her what she had to say. We also went to the radio 6 studio. They had a left and right control pad for people that were left handed and right handed. My favourite part was the blue peter/ DNN (CBBC show) studio. I recognised the props from TV. If you looked up you could see the hundreds of cameras and lights. It looked cool.

The day on a whole was perfect!! 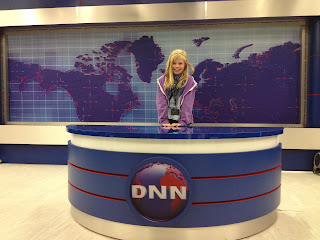 Email ThisBlogThis!Share to TwitterShare to FacebookShare to Pinterest
Labels: ARTS AWARD PART B: BE THE AUDIENCE